When we first began(in 2008 – 2009) connecting with children in several locations (mainly around the Hyderabad area and one in Sindhudurg), our objective was relatively limited. To provide these children, unfamiliar with English language, an opportunity to interact with native English speakers (mostly from the UK). We hoped that the interaction would help the children learn English and begin to make meaning of what they read.

Most of the Grannies had responded to Sugata’s appeal in The Guardian and connected via Email expressing their interest in the idea. I had followed up on the emails, had an informal chat or two with those who wished to go further, and by May 2009 there were about 70 to 75  emediators(the term ‘Granny’ came a little later) lined up to connect with children in 10 locations in Hyderabad (then Andhra Pradesh now Telangana) plus in Shirgaon, Maharashtra. It was a group, yet not a community for their only point of contact were the specific labs they skyped into, and me.

Each emediator interacted with me fairly extensively. Via Email, and via Skype, and occasionally by phone. Sometimes, it would be ‘on the ground’ in the midst of a session along with the children [or connected through another computer with the text chat on skype to provide an idea of what was happening that they couldn’t see. Sometimes it was a ‘one on one’ interaction from my hotel room in Hyderabad, or from back at home base in Pune. Sometimes it was a follow-up of a session to help understand the children’s reality; at other times to share ideas and possibilities of what else we could do. Often over a ‘cuppa of tea’!

We have come a long way since then. We have evolved. Evolved into a fluid, ever changing group that engages with children not only to read stories to them, but to play games, do puzzles and craft; show them a bit of the world outside their homes, to hear what the children have to say, to provoke their curiosity, occasionally ask a ‘Big” (or ‘not so big’ question), to encourage analysis and reflection on their own thoughts. 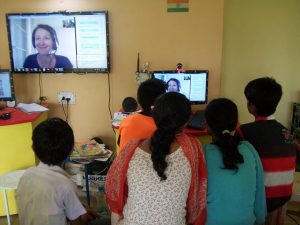 We have evolved into a group that modified and adapted and expanded the wiki that Mabel helped set up so that we could better reach out to the children not just in the original SOLE labs but many other centres that came on board when the original project ended. Evolved into a group with a ‘Core Team’ that helped with not just bringing on or ‘screening’ potential Grannies, but that supported them and the centres. Evolved into having different kinds of presence on social media and specifically on Facebook. On Facebook we have 2 private groups. One that facilitates interaction between Grannies, Coordinators, and some wellwishers, and one that supports new Grannies or those who want to have a focused discussion. AND we also have a public page! We have a wordpress blog, and now a dedicated website that is being added to bit by bit. The website (on which you are reading this) has several components. A public part where we share with the world what we are up to. And there is a private part that facilitates the interaction between the Grannies, the children, and the centres. And then, there is an administrative component to facilitate the bringing on of new Grannies and centres.

As you can see, I am no longer the only point of contact! We evolved, (in a very self-organised way, I’d like to emphasize.) into a community. The Grannies connect not only with the children and coordinators of the centres / labs they skype into; they connect with other Grannies. They discuss ideas that cut across not only the labs they connect and are familiar with, but consider and share possibilities in the context of other locations as well. They support each other and the coordinators not only with specific ideas and information, but step in for each other occasionally. They ‘like’ each other’s posts and photos, and commiserate with each other when technological or other challenges come in the way of their sessions. And we don’t always agree with each other. There are disagreements voiced and options suggested. ‘Experiments’ tried out. And views shared. It doesn’t stop there. The Grannies connect with each other even at a personal level. Sometimes one-on-one, sometimes in a group. They take joy in the success of a connection and a fruitful session ANYWHERE. They say ‘hang in there’ as sessions and centres post challenges. And they also take joy in the birth of a grandchild, or a child’s graduation, or a new job. They reach out with the hug or an embrace in the face of a bereavement or illness. They even arrange to visit each other and sometimes centres on their own. Whether it’s a cup of tea or a slice of cake or just a stroll down the lane, many of the Grannies go beyond the virtual as well whenever there is an opportunity. And they have adventures and fun together! 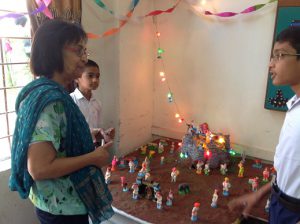 A visit to a Granny Cloud Centre [Phot: Suneeta] 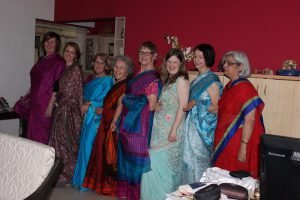 A bit of fun [Photo: Suneeta]

And through their online presence, open their doors, their homes, and their hearts to not just the children but the coordinators – sharing a joke, sharing the joy of achievements, and the sorrow of disappointments and the hope for change…

Every response, ‘like’, sad face, every smile – they all count. Because it takes them beyond themselves and ‘their children’. Because it’s not just a group. It’s a community. And it’s self organised.

If you want to get a flavour of what happens in the Granny sessions, you can visit: http://www.grannycloudtales.wordpress.com